Season of ’42 by Jack Cavanaugh 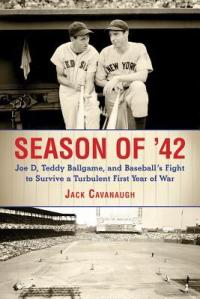 In 1942 the war was not going well for the United States. There was a great need for ships, planes, submarines etc and manpower. Especially strong young men between the ages of 21 and 35. It therefore might have seemed frivolous for men to be playing a “kid’s game”, at this time. President Roosevelt however gave major league baseball a ‘green light’, many draft boards went along with it, the ball players that were drafted were usually assigned as physical fitness trainers or actually played ball for the Army or Navy.

The season ended with the St. Louis Cardinals beating the NY Yankees in the World Series in 5 games (don’t worry, Yankees beat the Cardinals in 1943 in 5 games). Baseball would be played for the rest of the war, but not at the same level since after 1942 many players did end up drafted. But it was a magical season, with twilight games played in some cities because of the blackouts. With rationing of sugar and butter and nylons and gasoline, baseball took peoples minds off the war for a few hours.

This book covers baseball in that season, but also life in that season, an interesting well researched and written account, that I feel would be enjoyed by baseball fans and anyone interested in the history of the United States.

Comments Off on Season of ’42 by Jack Cavanaugh