Posted by Belleza on February 22, 2020 in Uncategorized. 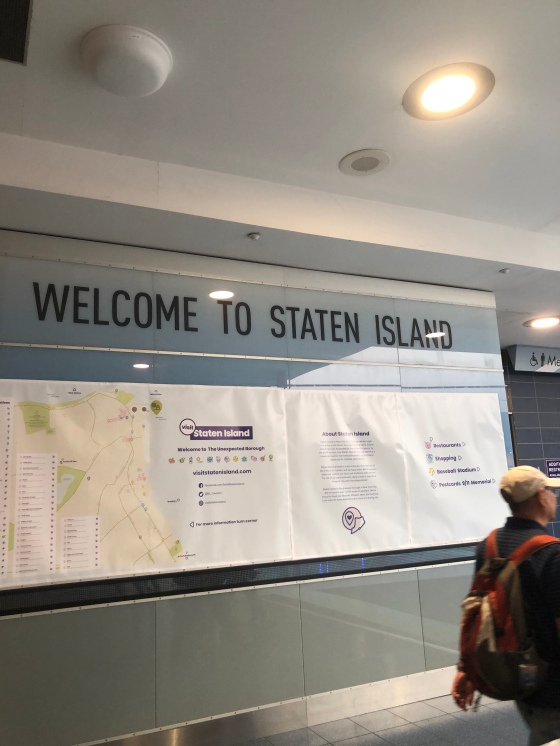 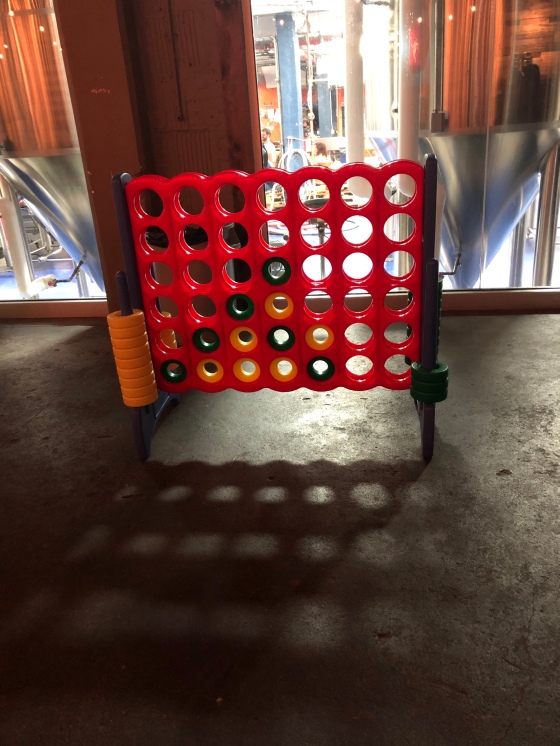 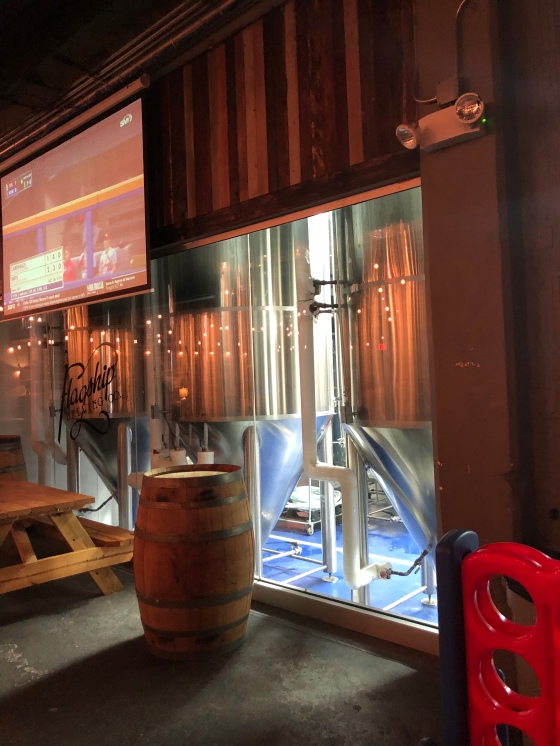 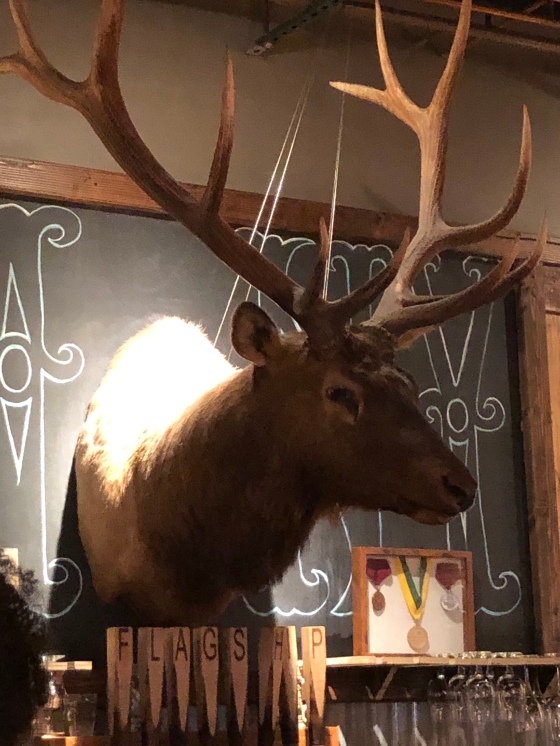 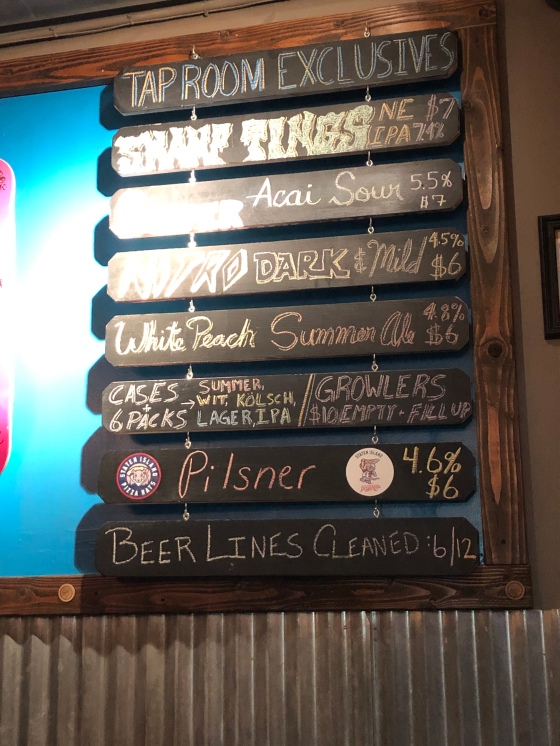 Posted by Belleza on February 22, 2020 in Uncategorized.

As I was sitting at the brewery talking with one of the ladies that works there, we were discussing the “Pink Boots Society” and women’s brew day. I mentioned I had gone once and felt out of place, it was nothing anyone did, everyone was very welcoming, even when I told them, “I’m not in the industry, I’m just a fan. Well I have a beer blog …”

A rather sorry excuse of a beer blog.

Today I decided I should start it up again so I logged in only to find 11 draft posts. 11 posts where I went to a brewery and started posting and never finished. In the case of this post, all I posted were photos. No text, no notes about what happened or what I thought of the brewery. Sigh. 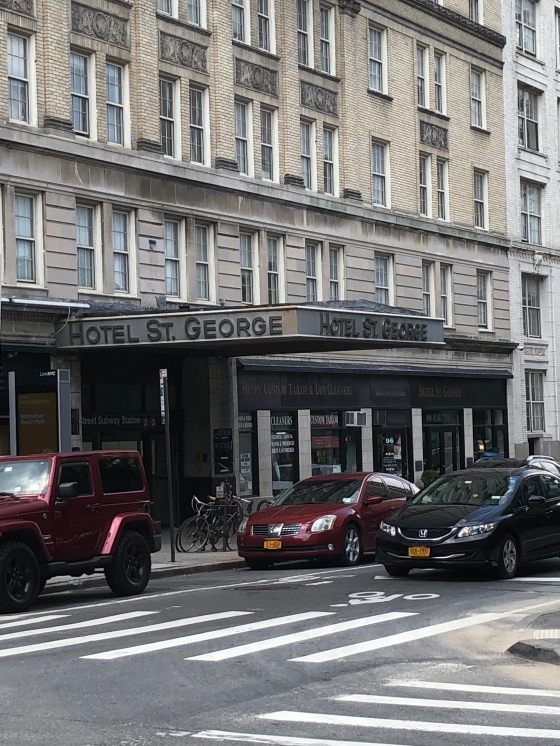 Being a bit of a coward, I don’t want to look at the other drafts and will just jump in on what I remember from this day. The reason there are pictures of more than just the brewery are because I was in DUMBO for a photography meet-up. When I heard it was in DUMBO I thought to myself, “SWEET! After the meet-up I can check out Randolph Beer. That was the plan. But first …. photos. The organizer of the meet-up was very knowledgeable about NYC and DUMBO and beside photo tips shared some trivia about NYC and Brooklyn with us. It was a fun time.

I had to include this picture because my girlfriend used to live in Brooklyn and had told me tales about the St George. When I sent her a picture of it, she asked me “Where is the homeless guy that used to live there?” I told her he had been gentrified.

Plymouth Church – part of the Underground Railroad, SO kind of a famous church. 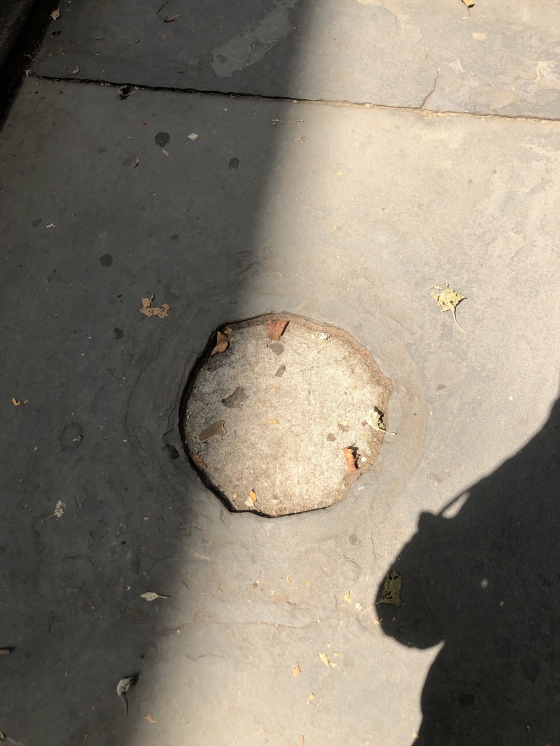 These round spots are where the chute for the coal bin was. The delivery person would just load up the bin. Kind of how petroleum heating tanks have valves now. 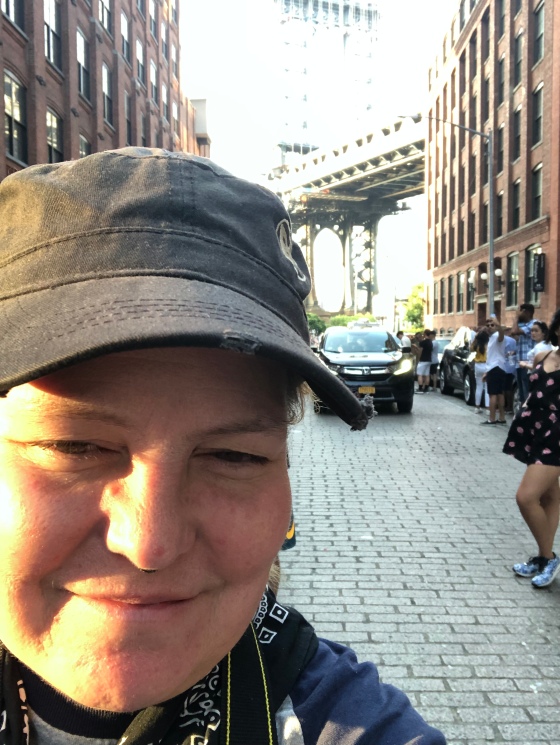 Obligatory DUMBO selfie, pretty sure this was before visiting the brewery.

And then on to the brewery. Since I didn’t write anything down, this may not be accurate, but see the shiny tanks! Also food, guest taps and pinball machines. 27 July 2019 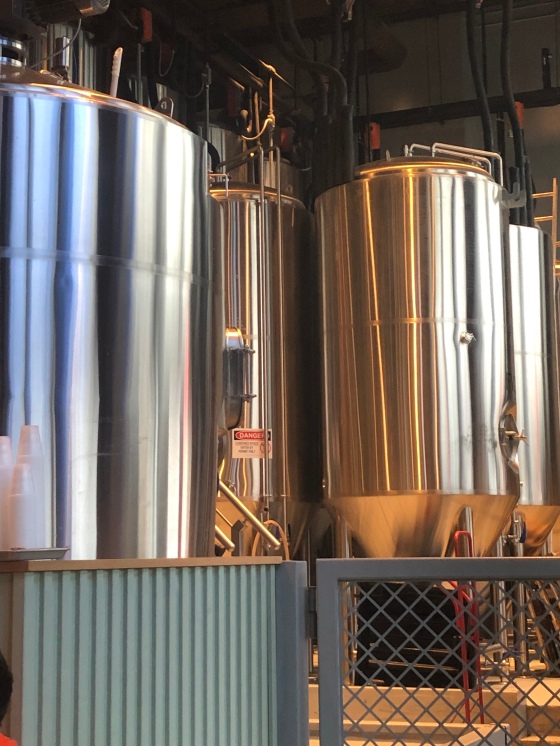 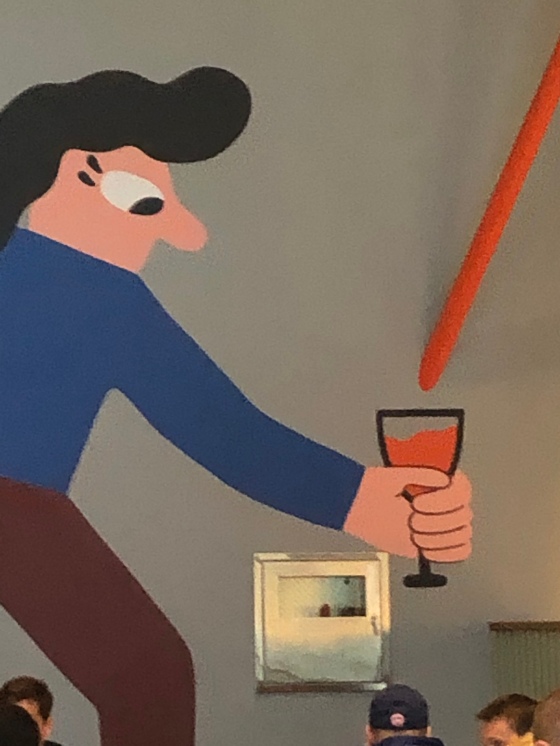 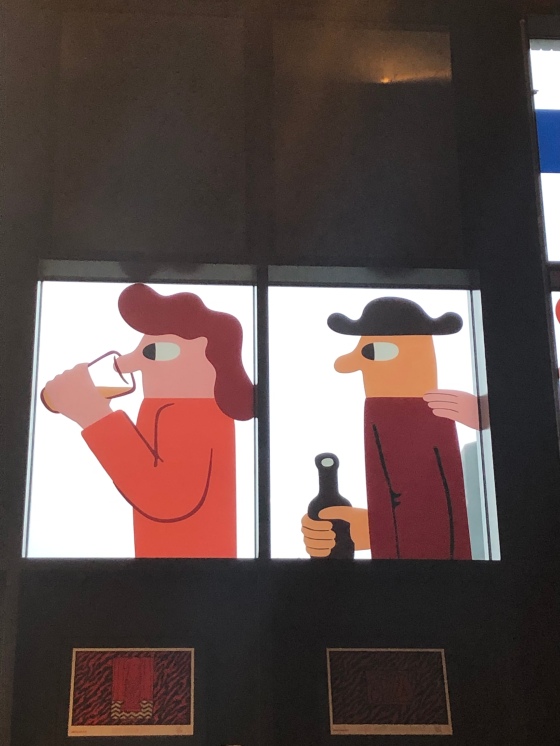 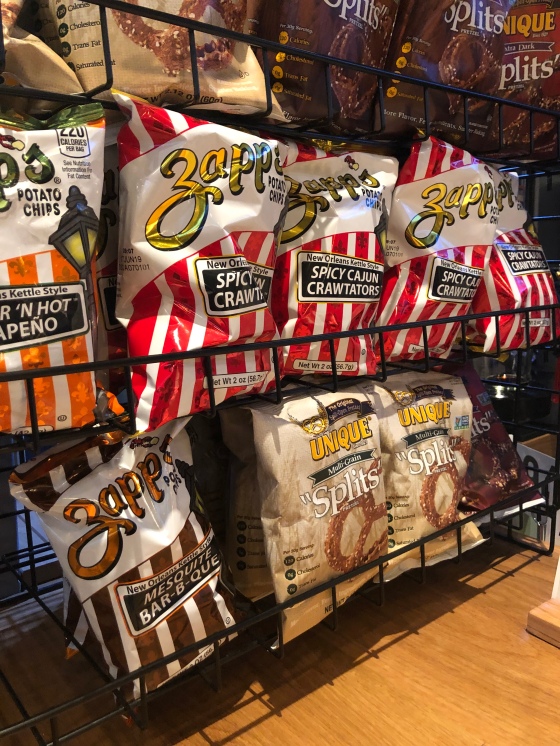 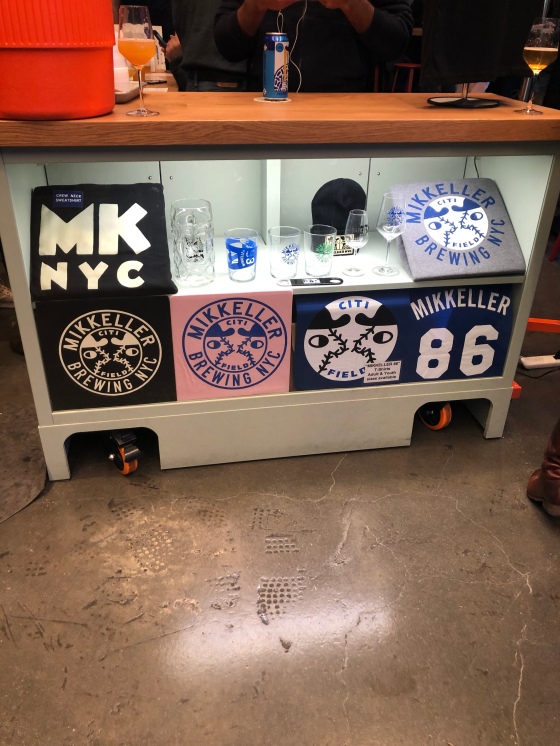 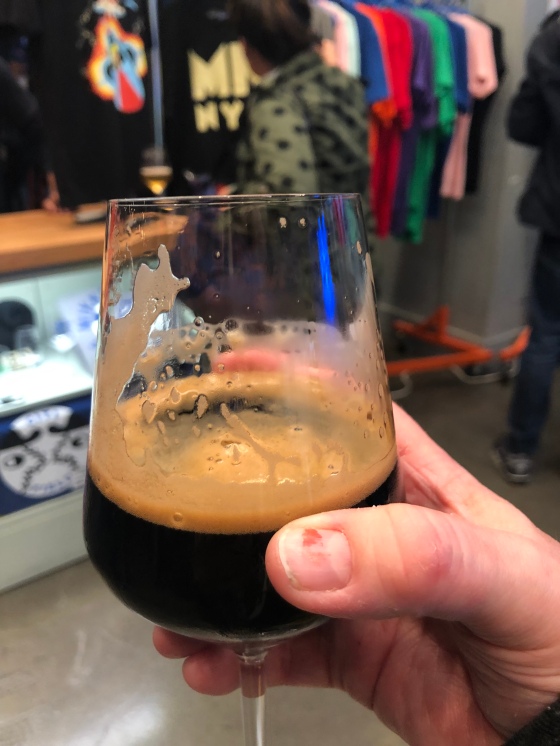 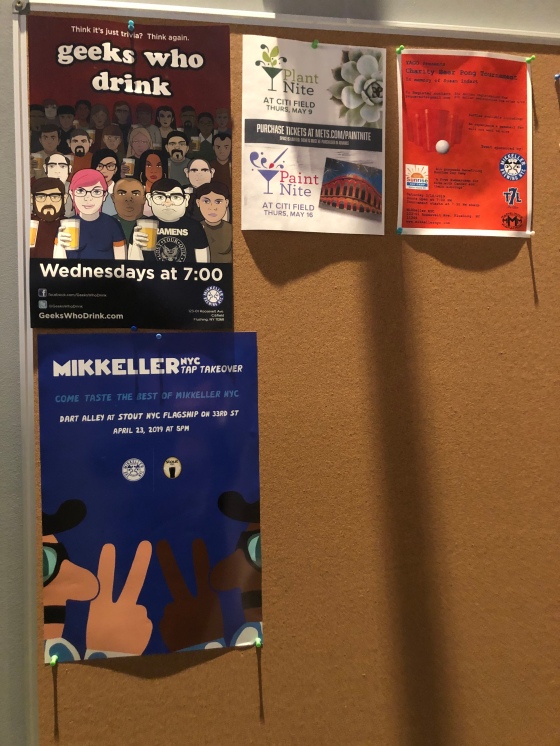 Comments Off on Mikkeller

Their last day was March 30 so this post is a little late. At lunchtime I walked over the bridge to look at the old location. It was sad, corrugated metal gates covering the front of the building. A bit of color provided by the “We’re closed” sign with their new address on it. The picnic tables from the garden are gone but the plants are still there. I wonder why they left the plants.

Still change can be a good thing, as much as we might fight against it. I wish them much success in their future endeavors. I will keep you updated as best I can.

Comments Off on Transmitter has left LIC

After a beer and some ‘slidies’ (it’s a Binghamton thing) we walked over to Rare Form, a smaller and newer brewery. It has only been around since 2014. Rare Form doesn’t have a kitchen, we had already eaten so that wasn’t a concern. They do have food, cheese and bread, chips, nuts etc. 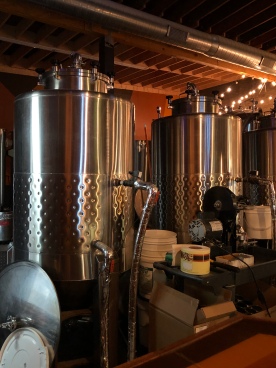 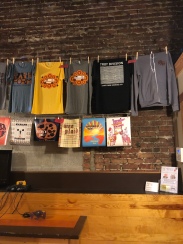 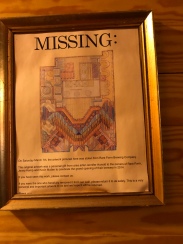 T-shirts, and seriously, what kind of low life would steal artwork off the wall?

Comments Off on Rare Form

Brown’s Brewing Company has been independent and fiercely defending happier hours since 1993. Garry and Kelly Brown spent three years renovating a 175 year-old forgotten warehouse on a then-blighted River Street in Troy, NY building a highly regarded and loved brewery and taproom, the first of its kind in New York State. As brewers constantly refining their craft, the Browns sought more space and acquired a second blighted 175 year old factory space located in North Hoosick, NY. The Walloomsac Brewery and Taproom facility provided the opportunity for Brown’s beer to be brewed and packaged. With an expanding distribution network across three states, two separate brew houses, a state of the art canning facility, two award-winning restaurants, a highly sought after private event space, and being a hub of memorable experiences for a quarter of million visitors each year, Brown’s Brewing Company has crafted a revolution of its own.

My work sent me to a training in Troy NY. My friend lives near there and since we both love beer, (he is a huge beer nerd) I told him I was coming. He picked me up after the training and we came here for dinner. The above is taken from their website and the link is above. A well established and very comfortable place to spend a few hours. A nice collection of brewery swag. It is what I would expect from a well established business. It kind of reminded me of Brooklyn Brewery, except it is larger and has more art on the walls.

Comments Off on Brown’s Brewery

In the shadow of the Ravenswood Generating Station, nicknamed “Big Alice” for the Alliss Chalmers manufacturing company that built the generator at the power plant, and recognizable due to the 3 orange and white striped smokestacks, sits the craft brewery Big aLICe. That the brewery is named Big aLICe is not a coincidence. OK, it’s not exactly, in the shadow, but it is close. It is also located in Long Island City which is why it’s aLICe.

BIG aLICe BREWING Co. began production in January 2013 on a 10-gallon pilot system, last Friday, 1 March 2019 they expanded with a barrel room in Industry City Brooklyn. I attended their grand opening. Oh I mean GRAND OPENING! It was a fabulous party, their great beer, friendly staff (Bella! Bella! Bella!), and live music. Most importantly, you can bring your pupper. 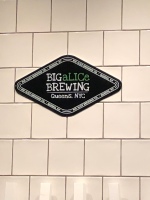 My Friday evening started at Transmitter, which is where my Friday evenings usually start, and end when I’m being good. The plan was one beer at Transmitter then on to Big aLICe for the opening. The brewer at Transmitter accused me of ‘cheating on him’, well we are not dating so I don’t feel guilty. He then asked if I minded delivering a bottle along with a message, and I didn’t mind, mainly because I figured I would get a free beer out if it, and I did.

Since I’m something of a regular in the LIC brewery scene I was recognized by one of the bartenders. Hence the salute mentioned above. This location is much bigger than the Queens location which means room for more people, more barrels and more pups. Kelly thanked me for coming, but as a dedicated beer blogger I had to come. I asked if the live music was going to be a regular event and was told they are trying to get something going. They really should after all, someone built a stage! There is merchandise, including but not limited to a hoodie just like the one I was wearing except it had Brooklyn on it instead of Queens.

Take a train ride to check it out. Also check out the article in amNY.

Posted by Belleza on February 13, 2019 in Uncategorized.

Comments Off on LIC Beer Project

If you don’t know what “Habanero Blobfish” means you are not the only one *shrugs*. That is what craft beer is all about, new recipes, experimentation, pairing habanero peppers with Cascade, Chinook and Simcoe. Basically, Fifth Hammer took their new West Coast IPA and blended it with peppers to make it spicy. There is also a grapefruit blobfish which is, you already know, juicy and fruity.

Comments Off on Habanero Blobfish