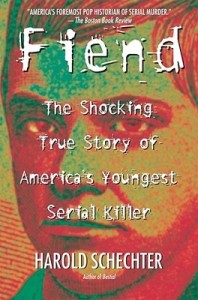 A MONSTER PREYED UPON THE CHILDREN OF NINETEENTH-CENTURY BOSTON. HIS CRIMES WERE APPALLING — AND YET HE WAS LITTLE MORE THAN A CHILD HIMSELF.

When Jesse Pomeroy was arrested in 1874, he was fourteen years old. When he was twelve he had abducted and tortured young boys, this lead to him being sent to reform school. He fooled people into believing he had changed, and was released. Returning to Boston, he went to work in his mother’s store, eventually killing two young children. He was dubbed “The Boston Boy Fiend”.

This book covers the life of Jesse Pomeroy, as much as is known, the crimes, the details of the investigation, trial and Pomeroy’s eventual sentence. It is also a history lesson, detailing how life was at that time, how ‘the good old days’ were not always so good. And how juveniles committing crime is not a modern day phenomenon. I know some will take exception to Pomeroy being labeled a serial killer, because he only killed two people, however, if he hadn’t been caught he would surely have killed more. He fits all the other criteria.

When reading Schechter, I have learned to carry a notebook with me, he has so much other interesting information in his books. This is another well written book that I have no problem recommending.

Comments Off on Fiend ~ Harold Schechter