First Beer of the Day

A short walk from the NJ Transit’s New Brunswick station is the Harvest Moon Brewery & Cafe which is where I started my tour on 31 January 2018. My friend Chris was with me which is why there are two glasses of beer. Mine is the dark one appropriately named: Dark Side of the Moon, categorized as a Black IPA or Cascadian Dark Ale; Chris ordered the West Coast Pale Ale. To go with the beer I ordered the Vegetarian Chili and Chris got wings. Harvest Moon is a brewpub, which means it has different regulations than a brewery. Brewpubs can serve other alcohol and food. Harvest Moon also had a cider on their tap list and a full bar. We stuck to beer. It was pretty tasty.

Next I tried Scotchy Scotchy Scotch Ale, a Scottish Ale, what I would call a Wee Heavy but I’m not sure if that is completely accurate since the ale was rather smooth and not ‘thick’. This was served in a ‘snifter’ glass and also very tasty. As it was not busy we chatted with the bartender who, when we told him we were from NYC asked if we had gotten lost. So I told him about the “Brewery Tour” and he started bringing out beer for us to taste. I tasted the OQ Coffee Porter which was very nice, smooth and not molassesey tasting. The beer was good and the food was also good. The chili came in a tortilla bowl which was rather cool. I got Mostly Citra NE IPA New England IPA in a growler for Cynthia. I am waiting to hear how she likes it.

When we left Harvest Moon we went to Wet Ticket in Rahway where I had Spanktown IPA, Imperial Oatmeal Stout and Kick the Bucket. It may seem like I was drinking a lot, but these three were all half pours. Here we had to take a tour, which can be 2 seconds or 2 minutes (brewery joke) and I took the opportunity to ask what kind of filtration system they used for their water, I was pretty sure they filtered their water and their answer confirmed it. They have a double carbon filter system. I also saw the nice old man I chatted up the last time I was here, but since I was with Chris I didn’t get a chance to talk to him. We then left Rahway and headed to Departed Soles.

The decor in Departed Soles just thrills me. It makes me happy just walking in here. I also like that I can get here via Path train, which for me makes it almost as accessible as the NYC breweries and since they distribute to The Rock (Prudential Center) when I come to watch the (mean awful) NJ Devils crush my Sabres, I can at least drink good craft beer while I’m crying. Anyway, back to the ‘tour’. I am considering this part of the tour even though I have been here before since this was the first time for Chris. He was also nice enough to pay for the beer here since I was running low on money. We each got a flight and a beer. The full pour is included in the price of the flight. We shared an apple I had brought just in case we needed a snack. I didn’t note what Chris got in his flight, but he posted it to his Instagram and you can check it out here. 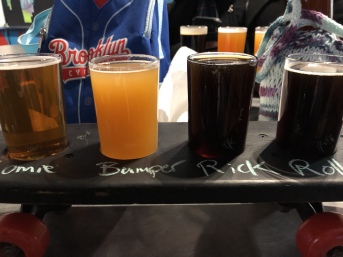 Somewhere along the way, it might have been at Harvest Moon, the yellow tape was discussed. It was said that with the tape around the lid of the growler, if you get stopped by the police, with the tape on the growler you won’t get ticketed for having an open container in your car. It does kind of make sense.

Comments Off on Harvest Moon