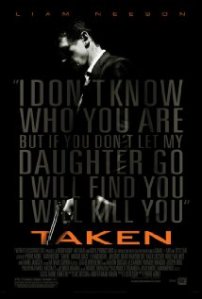 A former spy relies on his old skills to save his estranged daughter, who has been forced into the slave trade.

I love me a baddass Irish movie star. The moral of the story is, if you’re going to be abducted by white slavers, hope your daddy is as badass as Liam Neeson.

That isn’t exactly the way he says it in the movie, but he does cause he is, as I said before, badass.

I wanted to see this movie from the first trailer I saw, Liam Neeson is one of my favorite actors. He plays a former spy who hasn’t lost his skills, connections or paranoia. He is totally ruthless when he needs to be but genuinely cares for the innocent victims. Except for the one man that he didn’t throw off the boat that I thought he should have, I thoroughly enjoyed this movie.

Comments Off on Taken