The first time I came here I was with Gwen, we had spent the day and she had her mother’s Groupons. We had used one for bike riding, one for lunch and this was for dinner. When we got there we were told there was a 45 minute wait. So we left and went to the Spanish restaurant next door. Which was very good but the dinners are enough for two. 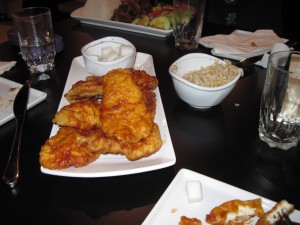 Saturday we came back, around lunchtime, this time it was Em, Fred and me. The restaurant was not crowded, when we said we wanted to eat in we were directed to the upstairs dining area. It was kind of nice, very casual. We didn’t order drinks, just had water. For appetizer we ordered pot stickers (fried dumplings) and since it was for Em and me we got the Spicy Soy Garlic sauce. The choices for chicken were wings, drumsticks, mixed or breast meat. Since Em and I are not a fan of dark meat we ordered the chicken breast, also in the Spicy Soy Garlic sauce. It came with a side of rice and a little bowl of what I believe was Daikon Radish Pickles. They smelled like radish and were pickled. We didn’t eat them. One of the many foods that I consider yucky.

Fred got the bulgogi, seasoned beef with onions with a side of rice and a salad. The pot stickers were fantastic, the sauce was so hot we couldn’t feel our lips after a few, and after Em figured out how much we had spent versus how much the Groupon was for, we ordered more to have after our chicken. The chicken breast was breaded and fried, but the breading was very thin, the chicken was not greasy and it had the same wonderful spicy hot sauce on it. The pot stickers however were much better then the chicken, I could eat them all day. Fred is not a fan of spicy food, but he ate two pot stickers and said they tasted good. Of course he also almost hit the ceiling because they were hot, but he kept stating, “I can do it!” We took about half the chicken home, reasoning with the cool temperatures and the fact that it was cooked that the chicken would still be good. We heated it up when we got home and after having two pieces Stitch declared them excellent, spicy hot and tasty.

Comments Off on Korean Fried Chicken